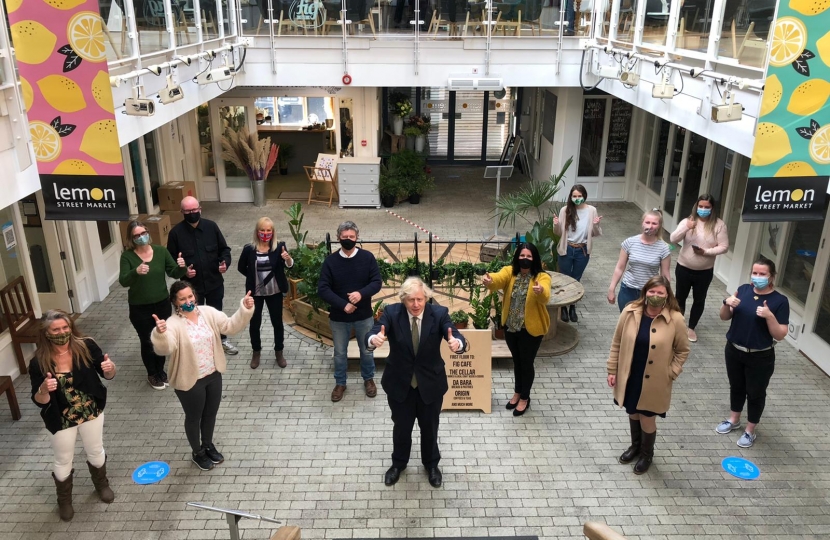 Prime Minister Boris Johnson has today announced a multi-million pound investment in Truro that he said would boost the local economy, create jobs and improve local skills after the pandemic.

The £23.6 million Deal for Truro will help transform Cornwall’s capital into a Connected River City and support its vision of becoming a modern economic, cultural and green capital for its residents and the wider community by 2030.

The Deal is designed to breathe new life into Truro’s waterfront by creating new spaces for business, green event areas, promenades and new ferry terminals with berthing facilities and pontoons.

The investment will also boost its cultural and tourism offer by transforming some of its historic buildings into businesses. The creation of a ‘go to destination’ in Boscawen Park will include a new “winter garden” to build on Truro’s national reputation as a city of bloom.

Green and sustainable travel are at the heart of these plans, connecting key locations and attractions with accessible walking and cycling routes including a proposed new bridge between areas currently isolated from each other.

The funding will also help convert some of Truro’s unused buildings into homes.

“We are determined to level up across the entire country, and the Deal we’re announcing for Truro will help to unleash its tremendous potential.

“Through a range of innovative projects including greener transport links and the restoration and renewal of spaces in the city centre, we will be able to rejuvenate the local economy, support businesses, boost connectivity and create new jobs.”

“I am delighted to have worked with the Truro Town Team and partners, including Cornwall Council, to bring this successful bid forward and it is brilliant to see the Prime Minister visit Truro today to see the plans for himself and provide his own support for them.”

“Proof again that Cornwall is at the heart of the Government’s levelling up agenda and I look forward to continuing to work with all concerned to make these plans for our great city a reality.”

The Government is already investing £3.75 million in Truro to support the redevelopment of the Hall For Cornwall and newly named Cornwall Playhouse theatre.

Today’s announcement responds to a locally led proposal put forward by Cornwall Council and the Town Deal Board with representation from business, the local community, public sectors and local MPs.

“The award of £23.6 million for Truro, as the country begins to emerge from the restrictions of lockdown is a fantastic boost for Cornwall and the city. The environmentally sensitive development of the town will create welcome employment and will bring a new vibrancy to many areas of Truro.”

“This investment follows on from the redevelopment of the Hall for Cornwall, another project supported by the LEP, which together will reinforce Truro’s position as a centre for our creative industries.”

This latest announcement is part of £92.4 million investment in Cornwall and Isles of Scilly from Growth Deals and the Getting Building Fund.

Today’s investment is the 53rd deal to be announced from the Towns Fund.

The Government has also announced a £4.8 billion Levelling Up Fund, a £220 million Community Renewal Fund and the £830 million Future High Streets Fund.

Last month, the Government also announced a £56 million Welcome Back Fund to help high streets and seaside towns prepare for the safe return of shoppers and tourists as national restrictions ease.

Following the conclusion of the G7 Leaders’ Summit in Cornwall, Truro and Falmouth’s Member of Parliament Cherilyn Mackrory has hailed the conference a huge success for Cornwall.