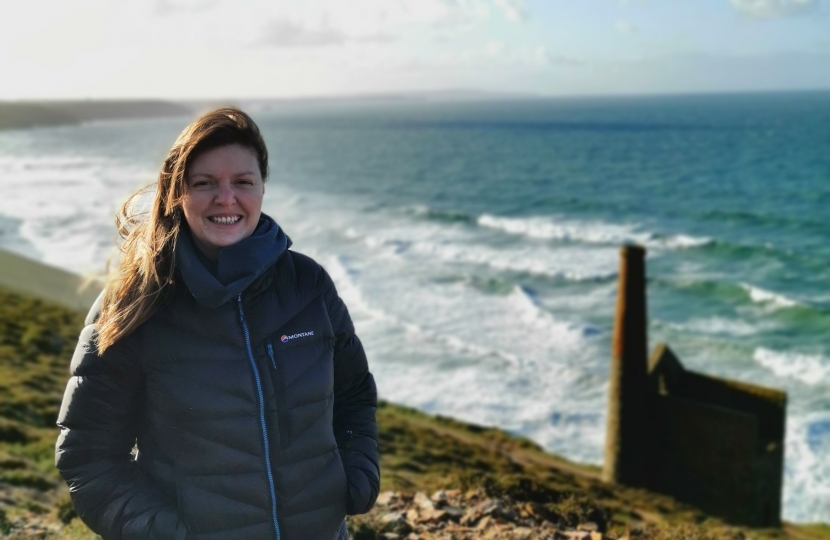 Cherilyn Mackrory was born and raised in the coastal town of Scarborough, North Yorkshire and moved to Falmouth 2011. Before her election she was a Cornwall Councillor and before this, she worked as an IT project manager in London, Bristol and overseas.

Cherilyn is married to Nick, who is Cornish born and has fished and surfed the Cornish coasts for over forty years.  Nick also grew up with the Kneehigh Theatre and has been involved in the music scene of Cornwall since the 1980s.  They have a young daughter and currently live near the Roseland peninsula.

Since Cherilyn’s election in 2019, she has done all she can to be an effective constituency MP, helping out locally and getting tangible results on the ground. She has helped more than 30,000 constituents and secured over £500 million in investment for the Truro and Falmouth constituency.

Cherilyn has made significant progress on key infrastructure projects. The duelling of the A30 is progressing well, the necessary work is happening behind the scene at Treliske to secure the new Women and Children’s Hospital, and she has helped secure the new Wheal Veor ward at Treliske, which as increased bed capacity by 28 at the hospital.

Cherilyn has also secured a new secondary school for Perranporth, covering the Perranporth, St Agnes and St Newlyn East area. In addition, Cherilyn secured £23.6m as part of the Truro Town Deal, which she sits on the board of.

In Parliament, Cherilyn is involved in several All-Party Parliamentary Groups, placing Truro and Falmouth at the heart of national policy discussions.

Cherilyn is Co-Chair of the All-Party Parliamentary Group on Ocean Conservation. The group focuses on a broad range of issues affecting the ocean, specifically plastic pollution, marine protection, water quality and climate change. The group brings together politicians and key stakeholders, including St Agnes-based Surfers Against Sewage, into a participatory space where expertise, ideas and networking converge to help better protect the ocean.

Cherilyn is also Co-Chair of the APPG on Baby Loss, alongside Jeremy Hunt MP. The group aims to develop policy that supports families dealing with the grief and loss of a baby and raise awareness of what more can be done by the Government, Parliament, or other agencies to help those affected.

Cherilyn is also a member of the APPG on Broadband and Digital Communication, which works to further the rollout of broadband in rural and urban areas, and to look at digital communication across the UK.

Cherilyn is also a member of the Women's Health APPG, which aims to empower women to ensure that they can make an informed choice about the best treatment for them and to make sure they are treated with dignity and respect.

In addition, Cherilyn is a member of the UK delegation of the Council of Europe (CoE). The CoE is a pan-European organisation of 47 European member states. Set up shortly after the end of the Second World War, the CoE’s core mission is to promote human rights, democracy and the rule of law across the continent.