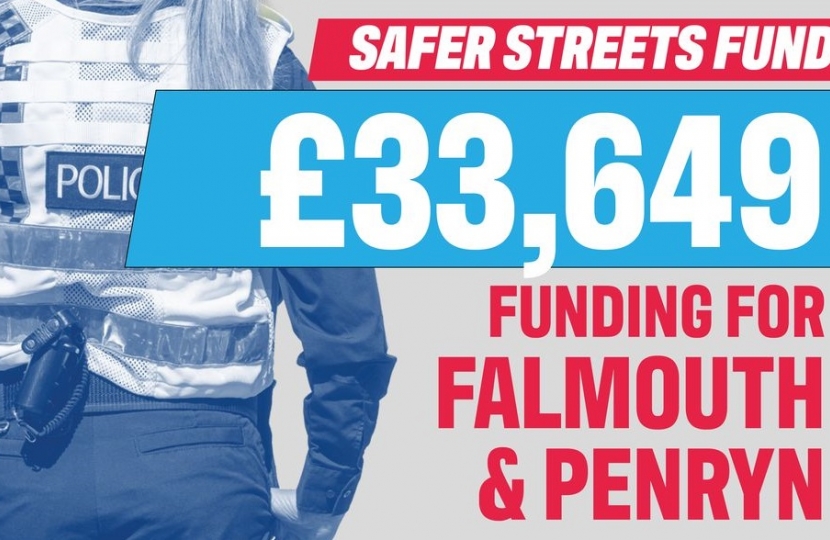 £33,649 of this funding will be going towards projects aimed at increasing the safety of public spaces for all with a particular focus on tackling violence against women and girls in Falmouth and Penryn.

Created with the objective of tackling local acquisitive crimes like car theft and burglary, the latest round of the Safer Streets Fund is focused on making public places safer for all, with an emphasis on the safety of women and girls.

Crimes which take place in public places such as sexual harassment disproportionately affect women, which is why this latest investment largely focus on making spaces safer for women and girls.

Recipients of funding have submitted bids for innovative plans to increase the safety of public spaces or projects which will focus on changing the behaviour of perpetrators.

Since its inception, the Government has committed £70 million to the Safer Streets Fund to support local areas across England and Wales to introduce initiatives aimed at stopping offences happening in the first place.

Round two saw 50 projects across England and Wales awarded a total of £18.4 million to go towards measures proven to cut crime, including simple changes to the design of streets such as locked gates around alleyways, increased street-lighting and the installation of CCTV.

Safer Streets is just one of the ways The Government is working to tackle violence against women and girls.

In August we published the Tackling Violence Against Women and Girls Strategy, which commits to radically changing how we stop violence and abuse using a whole system approach.   The strategy was informed by the over 180,000 people who shared their experiences of harassment abuse and violence online.

We have also funded a new police lead, Deputy Chief Constable Maggie Blyth, to set the policing strategy for tackling violence against violence towards women and girls across England and Wales.

“Any incident of violence towards women and girls is one too many and I worked closely with the Government earlier this year to get the message out around the development of the Tackling Violence Against Women and Girls Strategy, which has now been published, and gives us a sound plan to work on in this area.”

“I welcome this additional funding for Penryn and Falmouth and look forward to seeing it be used to make our streets safer for all, while continuing to work with all parties, national and locally, to ensure we do everything we can to eradicate the sadly too-prevalent violent crimes against women and girls that blight our society.”

“We have made good progress in tackling violence against women and girls, but these crimes are still all too prevalent in our society.

“That is why earlier this year we launched the Tackling Violence Against Women and Girls Strategy, informed by the largest ever public survey of women and girls on this issue. As part of this, the £25million Safer Streets Fund will invest in crime prevention initiatives across the country where women and girls say they feel most unsafe.

“The tragic cases of Sarah Everard, Sabina Nessa, Bibaa Henry and Nicole Smallman touched us all. As we Build Back Safer from the pandemic, tackling violence against women and girls is my priority.”