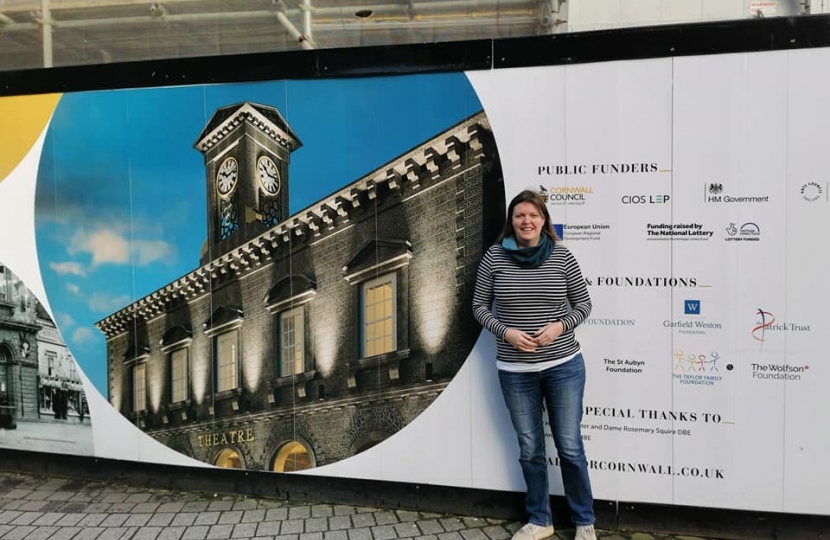 Hall for Cornwall has been awarded a grant of £100,000 from the latest round of the Government’s £1.57 billion Culture Recovery Fund as it plans for its reopening later this year.

More than £300 million has been awarded to some 2,700 cultural organisations across the country in the second round of support from the Culture Recovery Fund, the Culture Secretary announced today.

Hall for Cornwall, which has been undergoing a multi-million pound transformation over the last three years, will use the award to re-engage with audiences across Cornwall and for stage programme and technical preparations as it plans for its reopening later this year.

Over £800 million in grants and loans has already been awarded to support almost 3,800 cinemas, performance venues, museums, heritage sites and other cultural organisations dealing with the immediate challenges of the coronavirus pandemic.

The second round of awards made today will help organisations to look ahead to reopening and recovery as they transition back to normal in the months ahead.

“This is fantastic news for our Hall for Cornwall and I am pleased to have continued to work hard with the excellent HFC team and with the Government to highlight the support needed for this amazing venue to be able to reopen on time as planned later this year following its impressive refurbishment.”

“This additional £100,000 from the Government from the Culture Recovery Fund is very welcome and will be of crucial assistance in achieving this goal and I look forward to seeing this premier arts and culture venue not just for Truro but for Cornwall, reopening soon.”

“Like thousands of venues across the country we can’t wait to reopen and in our case it will be the first opportunity for people to see the amazing transformation we have undergone over the last three years. This money will help us reconnect with audiences across Cornwall and prepare for our exciting inaugural season later this year. We are grateful to the Cultural Recovery Find and Arts Council England for their continued and invaluable support.”

Sir Nicholas Serota, Chair, Arts Council England, said: “Investing in a thriving cultural sector at the heart of communities is a vital part of helping the whole country to recover from the pandemic.

“These grants will help to re-open theatres, concert halls, and museums and will give artists and companies the opportunity to begin making new work.  We are grateful to the Government for this support and for recognising the paramount importance of culture to our sense of belonging and identity as individuals and as a society.”

The funding awarded today is from a £400 million pot which was held back last year to ensure the Culture Recovery Fund could continue to help organisations in need as the public health picture changed. The funding has been awarded by Arts Council England, as well as Historic England and National Lottery Heritage Fund and the British Film Institute.

Improved café, bar and public spaces will make the venue more welcoming, and a creative digital business hub will firmly root the theatre as a space to inspire and create. Hall for Cornwall hopes to attract over 300,000 visitors a year, boosting post-pandemic footfall in Truro city centre.

In January Hall for Cornwall announced that the world premiere of Fisherman’s Friends: The Musical, a co-production of its new producing arm, Cornwall Playhouse Productions, would raise the curtain on its multi-million pound transformation and form the foundation of the theatre’s inaugural launch season.

The Hall for Cornwall operates as a charity, with all surpluses invested in working with young people, increasing the impact of Cornish creative industries, and creating co-productions with Cornish and national partners.

The transformation project is being supported by Arts Council England, Cornwall Council, the National Lottery Heritage Fund, HM Treasury, the Cornwall and Isles of Scilly Local Enterprise Partnership, the European Regional Development Fund and an army of passionate and committed supporters.

Following the conclusion of the G7 Leaders’ Summit in Cornwall, Truro and Falmouth’s Member of Parliament Cherilyn Mackrory has hailed the conference a huge success for Cornwall.