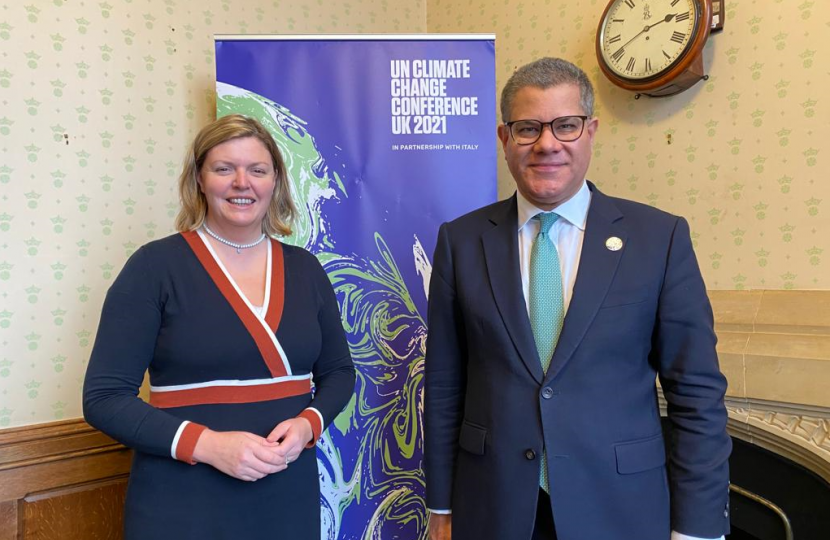 COP26 concluded last weekend in Glasgow and saw nearly 200 countries agreeing the Glasgow Climate Pact to keep the vital target of 1.5C alive.  After two weeks of intense talks, Climate negotiators from around the world agreed to urgently accelerate climate action. Hosting the summit, the UK showed its leadership on tackling climate change and drove ambition from the rest of the globe. For the first time at a COP event there was agreement on phasing down coal and increased cooperation to respond to extreme weather in the most climate vulnerable countries.

Welcoming the news, Cherilyn Mackrory, Member of Parliament for Truro and Falmouth said:

“Following the successful conclusion of COP26 I was delighted to meet with COP26 President Alok Sharma MP to discuss the outcome and what this means for Truro and Falmouth.”

“The outcome of the COP26 summit, with the Glasgow Climate Pact and other agreements reached on areas including, climate finance, deforestation and public engagement and education, is a colossal achievement that many did not think was possible. They are a major step in the right direction in the fight against climate change, and it is a tribute to the hosting of the UK and the leadership shown by our government that we made it such a success.”

“I will continue to do all I can to further these goals, including in Parliament with my work on the Conservative Environment Network (CEN) and in the cross party Environmental Audit Select Committee, as well as in Truro and Falmouth, pushing the green and blue agenda for our businesses and working with our communities to be as sustainable as possible.”

“At COP26 the world came together to agree the historic Glasgow Climate Pact and we can now say, with credibility, that we have kept within reach the goal of limiting global temperature rise to 1.5 degrees.

But, its pulse is weak and it will only survive if countries keep their promises and translate commitments into rapid action.

Over the coming year the UK Presidency will work hard to drive even greater ambition on the delivery of the Glasgow Climate Pact to lead the fight against climate change.”

Truro’s MP, Cherilyn Mackrory publishes her crime and anti-social behaviour results in a week where she meets the Minister for Crime and Anti-Social Behaviour to discuss the results.