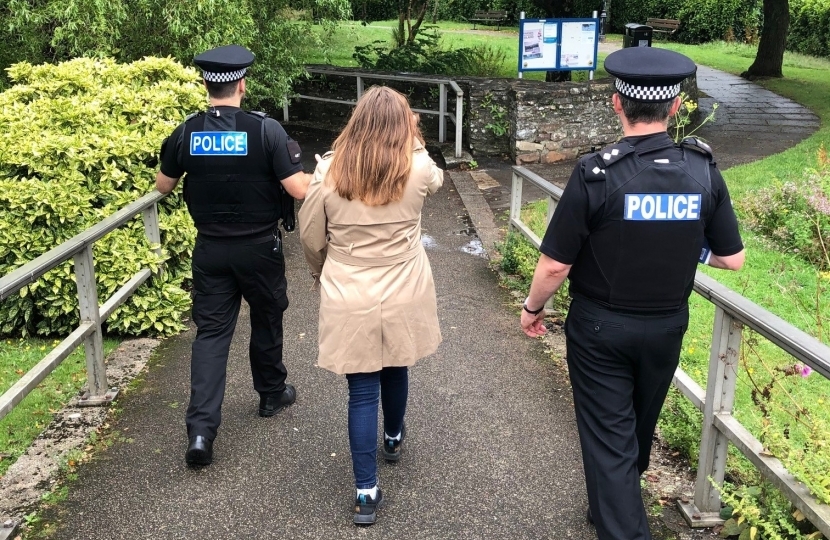 Truro’s MP, Cherilyn Mackrory publishes her crime and anti-social behaviour results in a week where she meets the Minister for Crime and Anti-Social Behaviour to discuss the results.

Prior to launching the survey, a group of stakeholders in the city, including Cherilyn had been working together to try and solve the issue through partnership working. However, it was clear that the situation was intensifying.

In November, Cherilyn announced she was to launch a survey. The survey has now closed and Cherilyn is publishing the results.

Reporting back and talking about the survey responses, Cherilyn said:

“Towards the end of last year I became increasingly aware of the situation with crime and anti-social behaviour in Truro city centre.

“This type of behaviour is not acceptable and will not be tolerated.

"Throughout 2021 I was in regular contact with the local police team and, following a serious incident in Furniss Island in October, I called an urgent meeting with Truro’s Inspector and the Business Improvement District Team to discuss the issues in the city centre.

“Unfortunately, the situation continued to intensify. More needed be done.

“Why did I do a survey? The responses to my survey will directly shape my representations on this issue going forward.

“I wanted to hear everyone’s comments and experiences about what is happening so I can come up with a proper plan with the key local stakeholders – like the police.

“I now have the results of my survey, and the results paint a clear picture. I am pleased to share them with Truro Voice readers.

“Firstly, I was pleased to have received over 400 responses to the survey. This is strong response for such a survey.

“I want to say a big thank you to everyone who took the time to complete the survey and for being so honest with me. It really is appreciated and the results are helpful. They paint a clear picture. There is a clear, visible issue with crime and anti-social behaviour in the city centre which is having an adverse impact on the people who live and work in the here, and more must be done to sort this out. I hear it loud and clear. Truro will not tolerate it any longer.

“In the last week since I collated the results I have met with the Crime Minister, Minister Maclean, to present the results to her. I have also spoken with Cornwall’s Police and Crime Commissioner, Alison Hernandez, about the results. I have requested they visit Truro to see what is happening themselves, but also requested for more resource to help tackle these issues."

“I have also been in touch with the key local stakeholders in the city and I look forward to meeting them in the next couple of weeks to review the results, review the current situation and come up with a plan of action.

“Be assured that there is a good team in Truro with some positive partnership work going on. We must now build on this.

“I urge everyone who experiences or witnesses crime and/or anti-social behaviour to report it to 101 or 999, depending on the seriousness of it. There is no substitute for this, and resources go where reports are.”