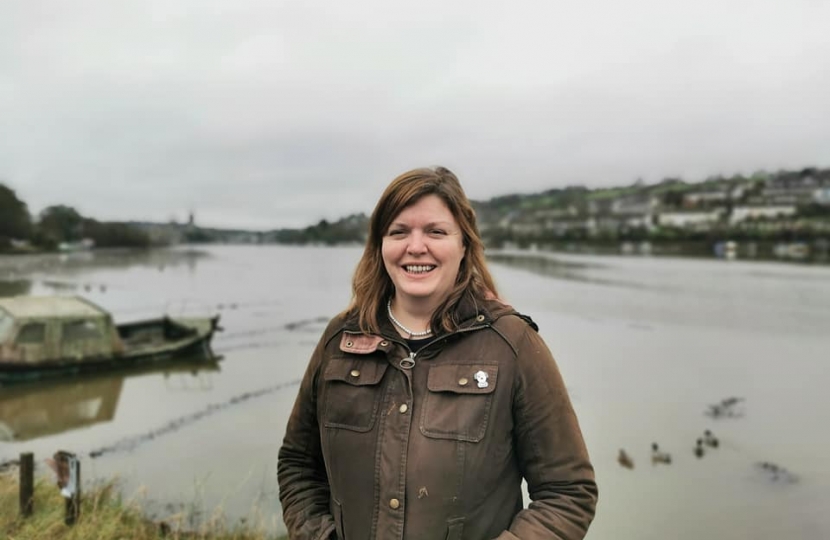 Member of the Parliamentary Environmental Audit Select Committee and MP for Truro and Falmouth Cherilyn Mackrory has joined the committee in calling for change following release of report which shows ‘Chemical cocktail’ of sewage, slurry and plastic polluting English rivers puts public health and nature at risk.

Poor water quality in English rivers is a result of chronic underinvestment and multiple failures in monitoring, governance and enforcement, the Environmental Audit Committee warns today.

“This report packs a punch. Our committee left no stone un-turned when we were exploring the health of our rivers. There is no doubt that our rivers are not in a good state – putting public health and nature at risk. More must be done, as explained in the report, and we now need to bring the key stakeholders together to deliver the real and proper change we need to clean up our rivers. The will to do it is there, we now need actions not more words.”

Only 14% of English rivers meet good ecological status, with pollution from agriculture, sewage, roads and single-use plastics contributing to a dangerous ‘chemical cocktail’ coursing through our waterways. Not a single river in England has received a clean bill of health for chemical contamination.

It is currently difficult to get a complete overview of the health of rivers due to outdated, underfunded and inadequate monitoring. Budget cuts to the Environment Agency have hampered the ability to monitor water quality in rivers and detect permit breaches or pollution incidents from the water industry and farming. River quality monitoring does not routinely identify microplastics, persistent chemical pollutants or anti-microbial resistant pathogens flowing through rivers.

The Committee heard that, until the passing of the Environment Act last year, there had been a lack of political will to improve water quality, with successive governments, water companies and regulators seemingly turning a blind eye to antiquated practices of dumping sewage and other pollutants in rivers.

Bacteria found in sewage and animal slurry can cause sickness. Yet few river users are able to make informed decisions about when it is safe to use rivers downstream of storm overflows and wastewater treatment works. The report recommends that the Environment Agency work with water companies to ensure that easily accessible information on sewage discharges, in as near to real time as possible, is made publicly available. The MPs are also calling on the Government actively to encourage the designation of at least one widely used stretch of river for bathing in each water company area by 2025.

The build-up of high levels of nutrients, such as phosphorus and nitrogen, from sewage and animal waste, is choking rivers with algal blooms that reduce oxygen levels, suffocating fish, plants and invertebrates. Along with the stresses of plastic and synthetic chemical pollution and climate change, this is creating multiple pressures undermining the health and resilience of freshwater ecosystems. As a result of pollution in our rivers, freshwater species such as salmon are at risk.

The impact of wastewater from sewage treatment works and sewer overflows is preventing 36% of water bodies from achieving good ecological status. The Committee was alarmed at the extent of sewage discharge and of misreporting and large spills by water companies. Citizen science analysis of water company data suggests that the true number of sewer overflow discharges may be much higher than those reported by the water companies to the Environment Agency. Water companies appear to be dumping untreated or partially treated sewage in rivers regularly, often breaching the terms of permits that only allow this in exceptional circumstances. An urgent review of water companies’ self-monitoring is needed, the report concludes.

The impact of rural diffuse pollution is the most common form of pollution preventing rivers from achieving good ecological status. Intensive livestock and poultry farming is putting enormous pressure on particular catchments, such as that flowing into the River Wye, as it may be raising the river's phosphorus levels. The Committee is calling for each catchment to have a nutrient budget calculated. Pollution must then be progressively reduced from all sources in the catchment until it does not exceed the capacity of the river to handle the nutrients. New poultry farms should not be granted planning permission in catchments exceeding their nutrient budgets.

A major source of plastic pollution in some rivers are the tiny particulates worn away from brakes and tyres which then get washed into watercourses from busy roads. The Committee heard concerns that National Highways, local authorities and the Environment Agency were not doing enough to prevent this pollution entering rivers.

Fats, oils and greases, and cleaning and hygiene products containing plastic, are causing huge problems for drainage systems when they are poured away in sinks or flushed down the toilet. Single use plastic hygiene products—often coated with chemicals that can harm aquatic life—are clogging up drains and sewage works and creating 'wet wipe reefs' in rivers. 'Fatbergs' as big as blue whales are being removed from sewers, costing companies and their customers in the region of £100 million a year. The Committee is calling on the Government to adopt measures outlined in the Plastics (Wet Wipes) Bill to prohibit the manufacture and sale of single use cleaning and hygiene products containing plastic (other than that for medical use).

A step change in approach is vital to protect freshwater biodiversity

The Committee calls for a step change in regulatory action, water company investment, and cross-catchment collaboration to restore rivers to good ecological health, protect biodiversity and adapt to a changing climate. MPs are demanding far more assertive regulation and enforcement from Ofwat and the Environment Agency. The report recommends that Ofwat examine the powers it may have to limit the payment of bonuses to water company executives until widespread permit breaches cease. Citizen science must be supported and recognised by regulators. The Environment Agency should consider creating an online platform where citizen scientists can upload their data on water quality.

The Committee encourages the newly-established Office for Environmental Protection to use the powers it has been granted by Parliament to drive improvements in the regulatory and enforcement regimes which govern the state of England’s rivers.

“Rivers are the arteries of nature and must be protected. Our inquiry has uncovered multiple failures in the monitoring, governance and enforcement on water quality. For too long, the Government, regulators and the water industry have allowed a Victorian sewerage system to buckle under increasing pressure.

“Today, we are calling for these relevant bodies to come together and develop a system fit for the future. Monitoring regimes need to be reviewed, enforcement needs to be ramped up, and even public awareness needs boosting on what can and cannot be poured down drains or flushed down the toilet. So many emerging pollutants are being missed by inadequate and insufficient monitoring, and court actions against polluters have fallen dramatically.

“To deliver real change and improve the state of our rivers, a wide range of stakeholders must come together including the Government, regulators and water companies. The Environment Act signalled the first welcome sign of political will to tackle this issue. I hope this marks the start of Government regulatory and polluter action to improve the state of our rivers for all to enjoy.”